Get your dancing shoes on! This is going to be a wild night of infectious rhythms from the upbeat gypsy dancefloor punk of festival whirling dervishes The Great Malarkey to the festival favorite's Bomo Swing and the Funk n Soul, Swing, Reggae & Mashup Extravaganza Bass Heavy beats of Powello Bros!

Influenced by the likes of Tom Waits, Pixies, The Pogues, Beirut, Nick Cave, Fanfare Ciocărlia, Manu Chao, The Dead Brothers and Toots & The Maytals (the latter of whom they supported with only their third gig), The Great Malarkey are a riotous mix of musical styles delivered in a “multicultural train of fast beats and trembling slams of punk-folk spirit.”

“They’d brew up something of a storm live!” – Steve Lamacq, BBC6 Music

This band does not disappoint. They will bring their whole heart to every song, every show, every album and everyone who wants to listen.

The Bomo Swing comes bouncing out of Bournemouth, an eight piece band renowned for its high energy and unique blend of Balkan, Reggae, Cumbia and dance. All powered by sizzling Latin drums, jazz influenced bass lines and topped off with spirited gypsy violin.  Their upbeat performance and passion will bring a smile to your face and have you dancing your worries away as you enjoy the fiesta with them.

Intergalactic space goats, brothers and partners in crime, the Powello Bros! These two goat lovin' producers & turntable wizards are hitting up dancefloors high and low with their derpy mashup extravaganza... Expect high energy and questionable dancing with these guys bringing out the inner cross-stitch champion in everyone!

In their spare time they run the worst party this side of the Milky Way, known as House of Funk, are owners of The Roller DisGoat.

They also enjoy the odd spin with Mammoth Soundsystem, It's a Swing Thing, Swing & Bass and are residents for The Ale House & Pitcher & Piano in Taunton. 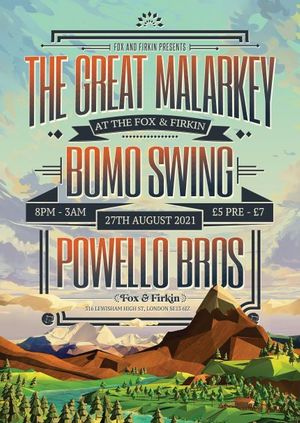