Join us for the second edition of South East Subway! A night dedicated to neo-soul, jazz fusion, hiphop & electronica offering a platform for new emerging artists in the S/E London scene alongside some of the bigger names in the industry.

We have joining us the incredible singer-songwriter and musician; David F. Walker. His Neo-Soul, Jazz, R’n’B and Hip Hop inspired sound continues to move listeners wherever he plays. Inspired by the likes of Bill Withers, D’angelo, Donny Hathaway and Robert Glasper, David is looking to launch his own brand of soul with his band ‘David F. Walker & The Project’. David has a unique soulful approach both vocally and in his writing, his voice has been compared to that of D’angelo, Maxwell and Marvin Gaye and described as emotive, raw, husky and haunting.

Support is provided by pianist, composer and producer, Nicola Guida, featuring some of London's top players performing as a trio. Guida is considered as one of the most inspired Italian jazz musicians of the new generation. Mentored by Barry Harris, Peter Martin, Aaron Goldberg, Greg Burk and Danilo Rea, he creates an original sound space, where the piano gesture is both elegant and underground at the same time.

Taking is further into the night we have Triple Point, the Co-founder and boss of GlassTalk records. Triple Point will be serving up his customary collage of experimental electronic music. 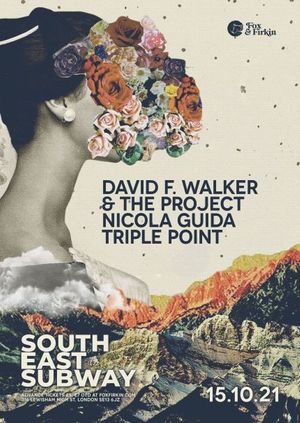