✨A drink and a pizza for £10 (vegan option available)

Since releasing her debut single in February 2020 Jess has had support from BBC Radio 6Music and BBC Introducing; surpassed 100,000 Spotify streams and has also performed at iconic London venues including The Jazz Café and Ronnie Scott's.

Gail’s influences are varied and she cites Amy Winehouse, Frank Ocean, Julia Jacklin, Nilufer Yanya and The Smiths as major lyrical and stylistic inspirations. However, in a few words, Gail would describe her own sound as “semi-upbeat alt-pop music about feeling miserable, that you can hopefully have a boogie to whilst crying”.

Singer/ songwriter / producer, Plant is a London based electro-pop artist from Portland, Oregon. Combining dark synths and playful vocals, Plant's songs dance along to a precipice of emotion.

Plant moved to London to study a bachelor’s degree in music: production, performance and enterprise at Westminster university at the age of 19, and has since gone on to carve her career in the industry, writing along musicians and writers such as Taneisha Jackson (Doja Cat / John Legend / Eve) / Paul Whalley (Lost Frequencies / Louis Tomlinson / Declan Donovan) and Steve Booker (Jessie J / Galantis / Stevie Nicks) to name a few.

Plant brings her ethereal music to life on stage, with an immersive one-woman experience.

South-London based Rayen is a singer/ songwriter who fuses her mixed Chilean and English background into her music. Inspired by Jazz, Funk RnB, Hip-hop and Latin American influences, Rayen incorporates different genres and styles of music together creating a versatile sound. Crisp beats and slick vocal hooks all over this!

Near Ladywell station, a walk away from Lewisham station and direct buses to a lot of places just outside our doorstep. 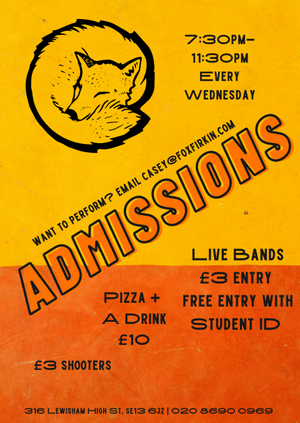