We are thrilled that, on Sunday the 21st January, The Deptford Dub Club will host d’Oxman Special. Oxman is probably best known for his work with the Dub Vendor Allstars and the Soul Jazz Soundsystem. However Eddie’s been at the cutting edge of Reggae since long time, he has his own show on Soho Radio, has produced and sold records with the best of them and has performed with luminaries like the late great U Roy.

Oxman has a massive collection to select from, does it with aplomb and is also a great toaster. Eddie always plays up a storm. He also brought the house down at our finale at the old place; trust, that was a night. D’Oxman’s a great friend of the D.D.C. having stepped into the breach, at short notice, before now, with his inimitable, crowd pleasing, connoisseurship.

In addition to our guest star, all of the usual D.D.C. massive will be along for this one. Club stalwarts Duppy Sista Sound will be kicking us off with an extended warm up selection. After the young lionesses, resident Soft Wax will be personing the decks in fine style.  He’ll be joined by the great Doc Murdoch, our resident Singjay, live and direct. Expect additional live instrumental accompaniment and guest vocals on the mic. too.   There will be fresh, Dubplate action from the crew and a wicked live mix from the mighty Prince Fatty.

In traditional style, we will be playing the best in foundation Jamaican roots music: from Ska, through Rocksteady and classic, vintage Reggae, to the present. All the selectors will be digging extra deep into their musical dub-baskets for this event.

After a succession of blazing sessions since Lockdown, we expect this night to be one of our most memorable. An enhanced sound system is a feature of this popular night, held in a convivial boozer. The palatial, discrete garden will feature Rocksteady all afternoon and have the evening session piped out to it. It has developed into a firm favourite chill out zone for Club stalwarts. Reach early and put on your dancing shoes.

Entry is Free until 6 and £3 thereafter. 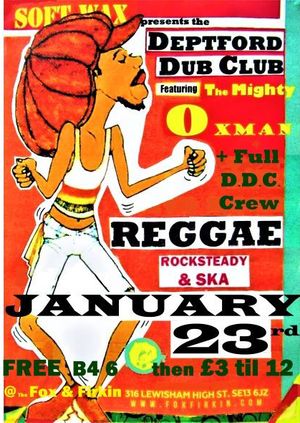