Blak Twang is a British rapper who grew up in Deptford, Lewisham, South East London. He is one of the leading figures in UK Hip-Hop.

His debut single was 1995's "What Goin' On". His debut album, Dettwork South East (a pun on the rail company Network SouthEast, was sent out to the media for self-promotion but never released. It included underground classics such as "Real Estate" and the title track, "Dettwork South East". His second album, 19 Long Time, also suffered from record label obstruction. This album featured classics such as "Red Letters" and another Roots Manuva collaboration, "Shhhoosh". However, his 2002 album Kik Off was awarded its label release, and it spawned the singles, the football themed "Kik Off", Twang anthem "So Rotton", and "Trixsta" (featuring Estelle), all of which achieved radio play and a degree of commercial success. In 2005 he released the album The Rotton Club, backed with the single "GCSE (Ghetto Children Sex Education)" featuring Twang protege and Rottonus Records signee, New Cross, Lewisham, South East London native, K9. Twang also released another single from the album in late 2005, "Travellin" which featured Barrington Levy in the original album version, but the video featured the First Man Remix with female singer Tali.

He was also featured alongside rapper Ty in the UK remix of Talib Kweli & Hi Tek's "Down for the Count."

Amongst his awards include a MOBO, a Kora, and a "Best International Hip-Hop Act" nomination from The Source.

Level access throughout, accessible bathroom, the garden has some multi levels to navigate. If you require any further information, requirements or assistance, our friendly staff are here to make your experience fully inclusive. Feel free to call us on 020 8690 0969 or pop us an email via info@foxfirkin.com. 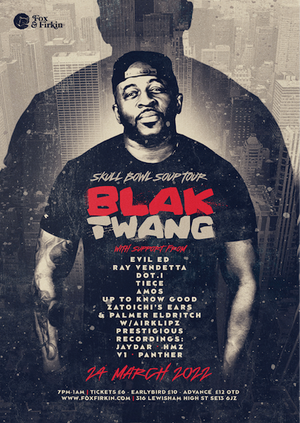