/// Ballin’ Jacks
Ballin’ Jacks really started in 2016 and spent around 4 years gigging around London building up a strong following and even played slots at Glastonbury Festival and Latitude Festival. Since then the band have endured many obstacles, including Brexit and a global pandemic that resulted in multiple changes to their line-up, before finding its final form with Rudy Blu (Vocals/Guitar), George Adams (Guitar/Vocals), Freddie Waxman (Piano/Vocals), Euan Dean (Bass) and Joao Grazi (Drums). They are currently working on their debut album with producer Brett Shaw (Foals, Florence + The Machine) and their latest single, ‘Tunnel Vision’, is slated for release on April 1, 2022.

/// The Magdalenes
Created in the shabby outskirts of East London in the late 2010s, The Magdalanes sought solace in the abrasive sounds of early punk. The two-piece brought their blues-infused garage rock to South London, where they joined forces with former Yak member, Vincent Davies. Vinnie brings a more melodic, cleaner sound to the party – you can come and join the fun at the Fox and Furkin.

/// Granfergo
Cinematic Soul Psychedelica! Granfergo is rooted in South American psychedelic chicha, African funk, American surf rock and modern day soul. The result is an earthy, funky, cinematic harmony of soaring guitar melodies, rumbling bass riffs and groove-driven percussion. Granfergo is formed of brothers Euan Dean on guitar and Adam Dean on bass. In 2020 they enlisted their former schoolmate and fellow Devonian Joe Hayles-Cotton on drums. The group strives to achieve a blending of styles from various places around the world that would not normally be found together. Among their many influences you will find not only funk, soul and rock music but also film soundtracks, sampled electronic music, and some of the most obscure musical gems from every era and every corner of the globe.

/// Martin Sportsteam
Alexander Brown is a London based singer/songwriter who writes psychedelic folk songs and enjoys exploring ambient improvised passages during live performances. He is currently working on his debut album which will be released when he feels like it.

———–Venue————
Fox and Firkin
316 Lewisham High St, London SE13 6JZ
Super Sound System + Stonebaked Pizzas + Huge Heated Secret Garden
Level access throughout, accessible bathroom, the garden has some multi levels to navigate. If you require any further information, requirements or assistance, our friendly staff are here to make your experience fully inclusive. Feel free to call us on 020 8690 0969 or pop us an email via info@foxfirkin.com. 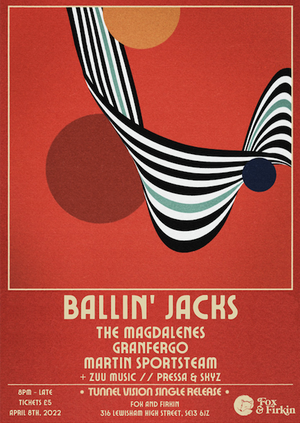