Even though the band is only in its infancy they have played across the country, supporring Do Nothing, opening Fair Play Festival to headlining shows in Manchester.

Garnering the respect and interest of label Do Your Best, who now manage them as they head to the studio to record their first tracks with Nile Marr (Hanz Zimmer, Man Made, Nation of Language).

Bitch Hunt - have unfortunately had to pull out of this show!

Though Helen’s bass playing may be familiar to you from previously playing in Boys Forever and Basic Plumbing (much missed Veronica Falls musician Patrick Doyle’s final projects).

Venturing out on their own the band released an EP in January (Gum demos) written, played, recorded, and mixed themselves at home in Peckham over lockdown.

Now a full live band, Helen and Kathy are joined by Pablo Paganotto on drums and Neiloy Mookherjee on guitar.

Sassyhiya have already gained a reputation as a band to watch out for, most recently making the folk of the Windmill dance their socks off while supporting Fat White Family’s Brian Destiny.

“This is genius lo-fi indie pop.” Beats to the Bar

“irresistible; a supercool slice of wonky post-punk”, “a must-listen for fans of The Raincoats, Shop Assistants, Delta 5 and Shopping “, “a modern, post-punk classic” Get in her ears 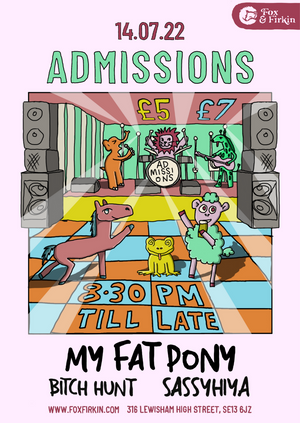