Yes, it’s the bomb, the D. D. C., featuring the incomparable Gladdy Wax. This will be a vintage night of reggae inna traditional Soundsystem style. As ever we’ll be playin’ the best in Jamaican roots music: from Ska, through Rocksteady and classic, foundation Reggae, right up to the present. Soft Wax will be joined by the full D.D.C. crew and guests to support the great man. They’ll all be diggin’ extra deep into their musical dub-baskets for this event, for sure.

This night will be a bit of a celebration for us. Mr. Gladwin Wright, better known as Gladdy Wax, is one of the all time great soundmen. He will be joining us on the decks and the mic, to headline the show. Gladdy has been operating at the forefront of British reggae for over 40 years. He started out in Birmingham, being associated with some of that city's most revered outfits. Since then, he’s operated his own synonymous Soundsystem, appearing at Carnival for well over 37 years consecutively, as well as numerous other venues – including at The Southbank, with Dennis Bovell, last Summer. Many regard him as the King of Carnival.

He has an awesome collection of top tunes and selects to entertain. Gladwin Wright is also know as the immortal Mr Vinyl Fingers. You’ll hear music here that you won’t hear elsewhere, selected to a nicety. Mr. Fingers is also a mean micman and made records, as a singer, back in the day.

Earlier in the evening, a warm up selection will come from D. S. S.. We’re delighted that they’ll be followed by Club stalwart DJ Melvina Moves. Melvina is a well-established figure on the London reggae scene. The vibrant Melvina is the fulcrum of the AfroUtopia sessions and has DJed at nights across town at venues like The Ritzy. She has appeared at the Windrush Festival and as far afield as Guyana. She can be relied upon for a scintillating Reggae Revive set, presented with style.

Following Melvina there will be more of the semi-live action for which the Club is known. The other Mr. Wax will be spinnin’ the rhythms. On the mic there will be toasting and singjay action, live and direct, from the mighty Doc Murdoch. There will also be live instrumentation from our fresh, new, 4 piece Horn Section, led by Tombone and extra special guest vocalists. We’re looking forward to another blinding evening of live mixes from the great Prince Fatty on the desk.

We expect this night to be one of our most memorable. An enhanced sound system is a feature of this popular night, held in a convivial boozer. The palatial, discrete garden will feature Rocksteady all afternoon and have the evening session piped out to it. It has developed into a firm favourite chill out zone for Club regulars. Reach early and put on your dancing shoes. 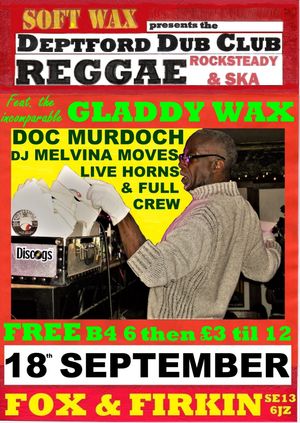