On Sunday the19th February, The Deptford Dub Club will host d’Oxman Special, at the Fox.

Oxman is probably best known for his work with the Dub Vendor Allstars and the Soul Jazz Soundsystem. However Eddie’s been at the cutting edge of Reggae since long time, he has his own show on Soho Radio, has produced and sold records with the best of them and has performed with luminaries like U Roy. Oxman has a massive collection to select from, does it with aplomb and is also a great toaster. Eddie always plays up a storm. He also brought the house down at our finale at the old place; trust, that was a night. D’Oxman’s a great friend of the D.D.C. and always blesses us with his inimitable, crowd pleasing, connoisseurship. In addition to our guest star, all of the usual D.D.C. massive will be along for this one.

The evening will commence with a warm up selection from Mr.Wax.

We’re delighted that he’ll be followed by Vandorta. She’ll be familiar to anybody that frequents Sounds of the Universe and has performed here before as part of the Soul Jazz Soundsystem. The vibrant Annabelle exudes positive vibes and can be relied upon for a scintillating Reggae Revive set, presented with style. On her D.D.C. debut Vandorta received the longest applause than we can ever remember a selector getting at The Club.

After her, resident Soft Wax will also be spinning on the wheels of steel, with a fresh selection.

He’ll joined by the great Doc Murdoch, our resident Singjay, live and direct.

They’ll be joined by our great, house horn section, featuring Tombone and Natty.

Plus the mighty Prince Fatty will be mixing live on the desk throughout the evening, ensuring a full and rich sound from the mighty rig.

Rocksteady will be playing all afternoon, in the glorious garden, at The Fox. We'll be stoking up the new set inside from 6 ( this will be piped out into the garden too.)

Free until 6 and £3 thereafter. Please note that all our regular Sunday sessions now continue until at least 12. Come on down, put on your dancing shoes and surrender to the rhythm. 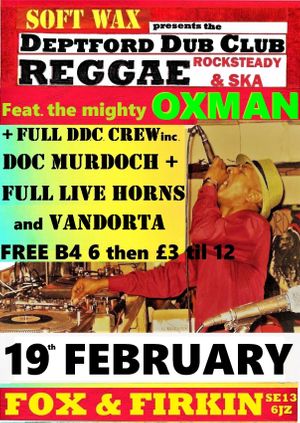